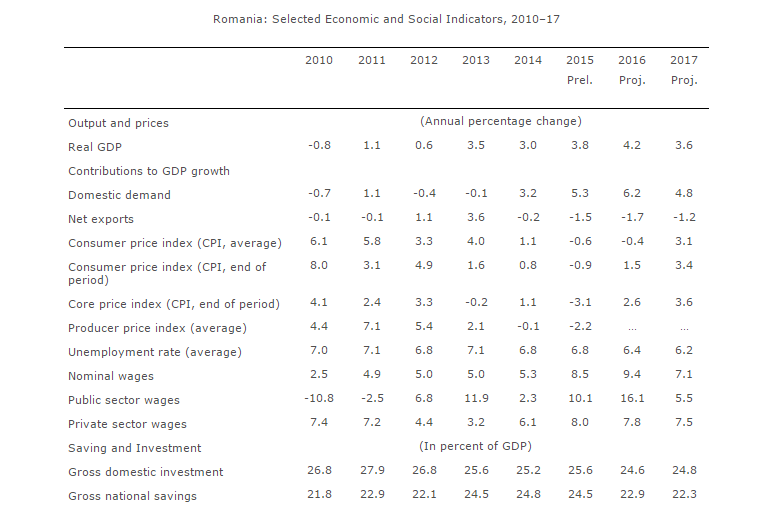 On May 9, 2016, the Executive Board of the International Monetary Fund (IMF) concluded the Article IV consultation (1) with Romania.

The Romanian economy is on a cyclical upswing supported by strong domestic demand. Recent hikes in minimum and public wages, record low interest rates, low fuel prices, and a Value-Added Tax (VAT) reduction have boosted private consumption. A catch-up in absorption of European Union (EU) funds has contributed to an increase in investment.

Annual headline inflation turned negative in June 2015 following a sharp reduction in VAT on food items from 24 to 9 percent. However, adjusting for the VAT changes, underlying inflation was 2.4 percent (year-over-year) in March 2016 (Eurostat estimate) despite the recent fall in international commodity prices and low inflation in the euro area.

There has been welcome progress in reducing banking sector non-performing loans.

Growth is expected to reach 4.2 percent in 2016—largely due to the one-off stimulus to consumption from the recent fiscal expansion—and decelerate to 3.6 percent in 2017.

Underlying inflation is expected to continue growing and the current account deficit to widen further because of import growth.

Two main risks to the economic outlook are electoral and external uncertainties. On the domestic side, populist measures in an election year could negatively affect market confidence and undermine investment. On the external side, a deterioration in emerging market risk perception could trigger capital outflows, a depreciation of the currency, and a substantial increase in the external debt-to-GDP ratio.

Maintaining adequate reserve levels, a flexible exchange rate regime, and fiscal buffers will be key in mitigating risks. Improving Romania’s long-term growth prospects to close the gap with advanced EU countries will depend on maintaining prudent macroeconomic policies and advancing the pace of structural reforms.

Executive Directors welcomed the significant progress in reducing vulnerabilities after the global financial crisis, notably the marked improvements in fiscal and external balances and in the resilience of the banking sector.

Directors observed, however, that there are downside risks to the economic outlook. They also noted with concern the recent procyclical fiscal relaxation, changes in financial sector legislation that could adversely affect financial stability, and the slowdown in structural reforms.

Directors emphasized the need to ensure fiscal sustainability and the credibility of the fiscal framework. In light of the large fiscal relaxation adopted last year, it is crucial that fiscal policy is anchored on a credible debt reduction path going forward.

Repealing the planned tax reductions or postponing them until offsetting measures are identified will help achieve these objectives.

Directors highlighted the urgency of stepping up structural reforms to unlock Romania’s potential growth, particularly by improving the efficiency of public investment and the business climate. They called for intensified efforts to strengthen the corporate governance of state-owned enterprises—including through passage of the draft legislation in parliament—and improve the planning and utilization of EU funds.

Directors also encouraged further reforms in tax administration, focusing on large taxpayers and making tax administration more business friendly more generally. It will also be important that policies on public and minimum wages take into account fiscal space, productivity growth, and competitiveness considerations. Directors commended the authorities for the progress in fighting corruption and encouraged them to address remaining weaknesses.

Directors concurred that a tightening bias in monetary policy is appropriate given current inflation projections. They recommended that the authorities begin reducing the gap between the market and policy rates, absorb liquidity from the market, and further narrow the interest rate corridor, while continuing to enhance the effectiveness of the monetary policy framework. Maintaining adequate international reserves remains crucial in light of elevated uncertainty in global financial markets.

They called on the authorities to reconsider the recently passed measures and to put adequate safeguards in place. Sustained efforts to further deepen financial intermediation are critical to foster private investment and growth.

(1) Under Article IV of the IMF's Articles of Agreement, the IMF holds bilateral discussions with members, usually every year. A staff team visits the country, collects economic and financial information, and discusses with officials the country's economic developments and policies. On return to headquarters, the staff prepares a report, which forms the basis for discussion by the Executive Board.

(2) At the conclusion of the discussion, the Managing Director, as Chairman of the Board, summarizes the views of Executive Directors, and this summary is transmitted to the country's authorities. An explanation of any qualifiers used in summings up can be found here: http://www.imf.org/external/np/sec/misc/qualifiers.htm.

IMF statement of the 2018 Article IV Mission to Romania

The Romanian economy is growing strongly, unemployment has fallen to a record low, and the financial sector is improving. But without policy changes, growth will turn increasingly fragile, according to an IMF press release. For one, inflation could increase further, with possible social detalii

The Regional Resident Representative of the International Monetary Fund (IMF) in Romania and Bulgaria, Alejandro Hajdenberg, made the following statement today: "I am very pleased to announce that Jaewoo Lee has been appointed as the new mission chief for Romania and Bulgaria. He detalii