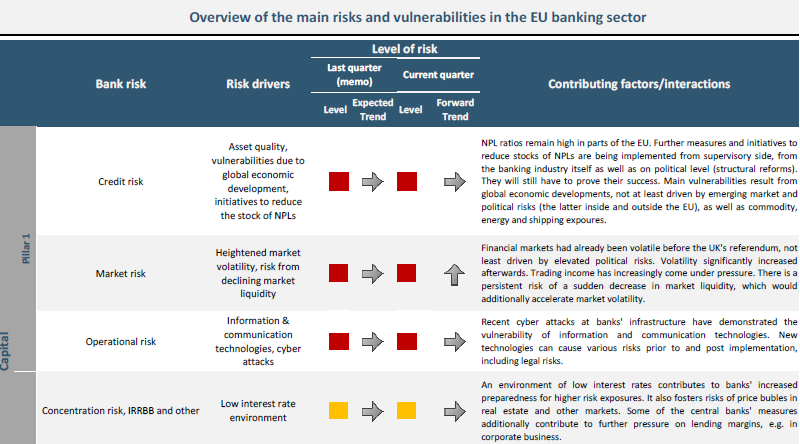 The European Banking Authority (EBA) published today the periodical update of its Risk Dashboard summarising the main risks and vulnerabilities in the EU banking sector on the basis of a set of Risk Indicators in Q1 2016. Together with the Risk Dashboard, the EBA published, for the first time, the results of a Risk Assessment Questionnaire, which it conducted with banks and market analysts in April and May this year.

The Risk Dashboard shows that in Q1 2016, EU banks' CET1 ratios remained at comfortable levels, albeit declining modestly from 13.6% to 13.4%. This was driven by a decline in capital that was not offset by a decrease in risk weighted assets and is mainly due to the gradual transition to the full implementation of the provisions on capital laid down in the Capital Requirements Directive (CRD) and Capital Requirements Regulation (CRR), as well as the reduction of retained earnings.

The ratio of non-performing loans (NPLs) stood at 5.7%, and although is 10bps below year end 2015, thus suggesting supervisory efforts are bearing fruit, remains too high. Looking forward, banks and market analysts assume a deterioration in asset quality mainly for asset finance, according to the results of the Risk Assessment Questionnaire. The results also show, that more than half of the banks plan to increase their volumes of corporate and SME financing portfolios as well as residential mortgage and consumer loans.

Profitability remained squeezed and the annualised return on equity (RoE) decreased to 5.8%, 1.1 percentage points (p.p.) below the first quarter last year - although it increased by 1.1 p.p. if compared to end-2015 data. The RoE was still significantly below banks' Cost of Equity (CoE), which is estimated between 8% and 10% by more than half of the institutions in the Risk Assessment Questionnaire.

In contrast to the three former quarters, the loan-to-deposit ratio increased to 121.6% from 121.2% in the former quarter. The asset encumbrance ratio decreased to 25.4% against 25.6% at the end of 2015. On the funding mix, a big majority of banks continued to show their reliance on retail deposits funding, and nearly half of them intend to increase their senior unsecured funding. Answers from market analysts show similar although partially more pronounced trends.