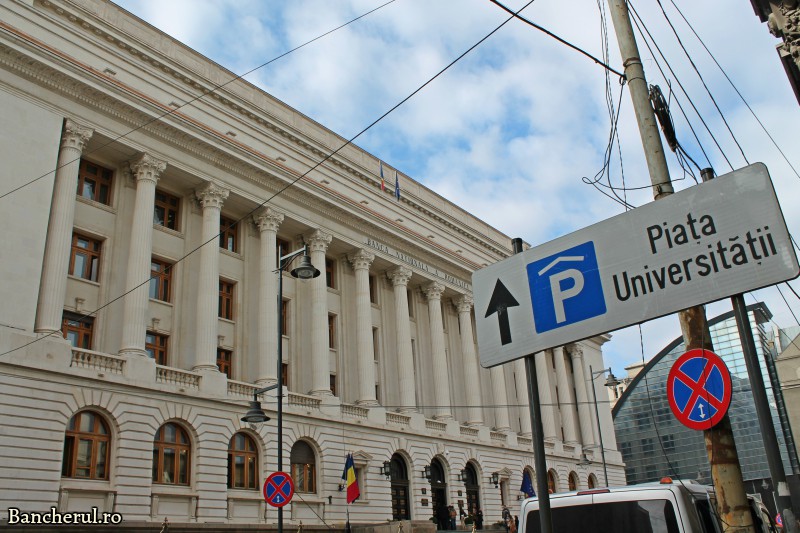 In its meeting of 5 April 2017, the Board of the National Bank of Romania decided the following:

- to maintain the existing levels of minimum reserve requirement ratios on both leu- and foreign currency-denominated liabilities of credit institutions.

The annual inflation rate returned to positive territory in January 2017, reaching 0.1 percent, from -0.54 percent in December 2016, and advanced to 0.2 percent in February, thus matching the projected level.

In line with expectations, the annual adjusted CORE2 inflation rate1 rose to 0.9 percent in February, compared with 0.3 percent at the end of 2016.

Against this backdrop, the average 12-month CPI inflation further posted less negative rates, climbing to -1.1 percent in February, from -1.5 percent in December 2016; calculated based on the Harmonised Index of Consumer Prices, the annual average moved up to -0.7 percent, against -1.1 percent in the final month of 2016.

Economic growth accelerated at a faster-than-expected pace in 2016 Q4, with real GDP rising at an annual rate of 4.7 percent, against 4.3 percent in the previous quarter. The pick-up in GDP dynamics was widely ascribed to the contribution of net exports, amid the slightly brisker growth of exports and the slightly slower increase in imports of goods and services, while domestic demand played a secondary part. On the supply side, the services sector strengthened its dominant position in terms of GDP formation.

In 2016 as a whole, GDP growth hit an eight-year high of 4.8 percent. The current account deficit widened to 2.3 percent of GDP, against 1.2 percent a year earlier, mainly on the back of a worsening in the trade balance and the balance on primary income.

For the beginning of 2017, available statistical data show a further high growth rate of turnover volume in trade and a swifter increase in industrial production, together with an ongoing contraction of activity in the construction sector. Unit wage costs industry-wide edged higher, with wage growth still well above labour productivity growth, despite a slight recovery in the latter at the end of 2016 and the start of 2017.

Real monetary conditions remained stimulative in 2017 Q1. The annual growth of credit to the private sector continued in February, largely on account of the advance in new loans to non-financial corporations. The share of leu-denominated credit in total private sector loans widened to 57.7 percent (from a low of 34.6 percent in May 2012), amid further divergent developments in the two components (up 13.9 percent for lei and down 11.5 percent for foreign currency in February). This certifies the improvement in monetary policy transmission, while also helping mitigate risks to financial stability.

The most recent assessments reconfirm the outlook for the annual inflation rate to stick to a slightly upward path in the following months, while remaining significantly below the lower bound of the variation band of the flat target. This is in line with the annual inflation rate trajectory shown by the latest medium-term forecast, published in the February 2017 Inflation Report. The uncertainties and risks surrounding the inflation outlook stem from both domestic and external sources.

Domestically, they arise primarily from the evolution of fiscal and income policies in 2017, as well as from the uncertainties regarding the future adjustments in administered prices – especially those related to the energy market deregulation –, whose developments may differ from the initial assessments.

Looking at the external environment, risks stem mainly from the uncertainty surrounding economic growth and inflation developments in the euro area, regionally and globally, as well as from the fluctuations in international oil prices.

Against this background and based on currently available data, the Board of the National Bank of Romania decided to keep unchanged the monetary policy rate at 1.75 percent per annum, to further pursue adequate liquidity management in the banking system, and to maintain the existing levels of minimum reserve requirement ratios on both leu- and foreign currency-denominated liabilities of credit institutions.

The NBR Board decisions aim to ensure and preserve price stability over the medium term in a manner conducive to achieving sustainable economic growth. The NBR Board reiterates that a balanced macroeconomic policy mix and progress in structural reforms are of the essence in preserving a stable macroeconomic framework and strengthening the capacity of the Romanian economy to withstand potentially adverse global developments.

The NBR is closely monitoring domestic and external developments and stands ready to use all its available tools.

The account (minutes) of discussions underlying the adoption of the monetary policy decision during today’s meeting will be posted on the NBR website on 12 April 2017, at 3:00 p.m. In line with the announced calendar, the next monetary policy meeting of the NBR Board is scheduled for 5 May 2017, when a new quarterly Inflation Report is to be examined.