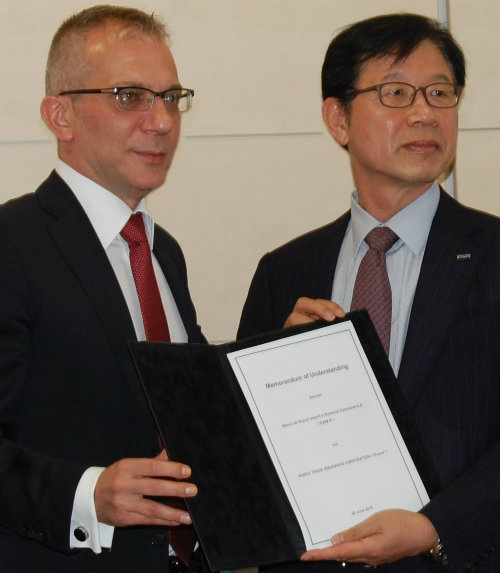 Romanian companies will be able to participate in investments in other countries along with Korean companies, under correct and competitive conditions following the framework agreement recently signed by EximBank with Korea Trade Insurance Corporation (K-Sure), the export agency in South Korea.

”By signing the Memorandum of Understanding with K-Sure, EximBank continues to encourage the Romanian exporters’ community to approach new markets outside European Union and especially to take part in complex export international transactions where the increasing competitiveness of Romanian companies may be successfully integrated. Thus, EximBank maintains its position as a valuable partner for Romanian exporters both by offering the necessary instruments in order to implement safe and competitive international commercial transactions and by getting involved in creating a favorable business development environment.”, said Traian Halalai, Executive President of EximBank.

During the meeting, the Korean delegation led by Kim Young-hak, President of K-Sure, a special emphasis was placed on the importance of cooperation between SMEs as a fundamental of sustainable economic growth by stimulating innovation and employment in order to reach new levels of performance. Also, the Romanian geo-strategic positioning at the Black Sea and its status as a European Member state qualify Romania an especially important partner in the South Korean commercial architecture related to the European market.

K-Sure, the export agency in South Korea has been established in 1992 and manages a total exports volume of 25% out of total export of the country.

According to the official data, in 2015, the total volume of commercial exchanges between Romania and South Korea reached 960 Million USD, Romanian exports increasing with 11,3% as compared to last year, up to 459,3 Million USD. Out of the top 10 outside EU target markets, South Korea was the only one that registered an increase of Romanian exports. In terms of preferred domains, Romania has exported tools and machinery, vegetable products and wood and related products.

EximBank has been actively involved for almost 25 years in supporting and promoting the Romanian business environment by endorsing the local companies’ projects. Starting up as an export agency, EximBank has evolved and extended this role keeping its unique profile on the market. Following the recent operational adjustments that support the bank’s adaptation to the national and international challenges as well as its increase in efficiency and responsiveness to clients’ needs, EximBank is now a complex financial institution having an accessible portfolio, available to any kind of company either SME or large company, involved in international transactions or only operating locally.

In 2014, EximBank has assumed the role of leading the coordination process of establishing the Romanian Exporters’ Association AREX, representing the exporters’ community, promoting and supporting the Romanian companies’ interests involved in international commercial transactions. AREX is now counting more than 100 members, important industrial companies as well as SMEs active in various fields such as furniture, automotive, energy, metallurgy or IT.