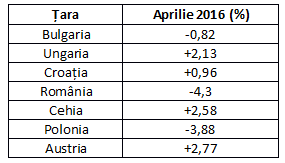 Bucharest Stock Exchange (BVB) returned to a downward trend in April after it recovered in March most of the losses from the beginning of the year. In April, the main index of BVB - BET - fell by 4.3%, according to a BVB statement.

BET Total Return (BET-TR) had in April a decrease slightly smaller than BET.The BET-TR index is reflecting the evolution of ten most liquid stocks listed on the Bucharest Stock Exchange, included in the BET and dividends distributed to shareholders by these companies.