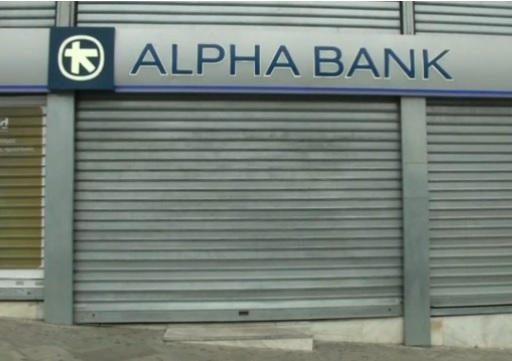 - Comprehensive assessment reveals total capital shortfall of €4.4 billion and €14.4 billion at the four significant Greek banks under the baseline and the adverse scenarios, respectively

- Shortfalls include AQR adjustments of €9.2 billion

ECB Banking Supervision conducted a comprehensive assessment of the four significant Greek banks (Alpha Bank, Eurobank, National Bank of Greece and Piraeus Bank) in line with the decision by the Euro Summit on 12 July 2015 and the Memorandum of Understanding between the European Commission, acting on behalf of the European Stability Mechanism, the Hellenic Republic and the Bank of Greece, signed on 19 August 2015.

This assessment comprised an asset quality review (AQR) and a forward-looking stress test, including a baseline and an adverse scenario, in order to assess the specific recapitalisation needs of the individual banks under the third economic adjustment programme for Greece.

The AQR resulted in aggregate adjustments of €9.2 billion to participating banks' asset carrying values as of 30 June 2015. Also, non-performing exposure (NPE) stocks were increased by €7 billion across the four banks, with the corresponding provisions already considered in the aforementioned AQR adjustments.

In addition to adjustments made directly to current carrying values, the AQR result was also reflected in the projection of banks' capital adequacy under hypothetical scenarios performed in the stress test.

Overall, the stress test identified a capital shortfall across the four participating banks of €4.4 billion under the baseline scenario and €14.4 billion under the adverse scenario, including AQR adjustments, after comparing the projected solvency ratios against the thresholds defined for the exercise.

The four banks will have to submit capital plans to ECB Banking Supervision explaining how they intend to cover their shortfalls by 6 November. This will start a recapitalisation process under the economic adjustment programme that must conclude before the end of the year.

Covering the shortfalls by raising capital will result in the creation of prudential buffers at the four Greek banks, which will improve the resilience of their balance sheets and their capacity to withstand potential adverse macroeconomic shocks. 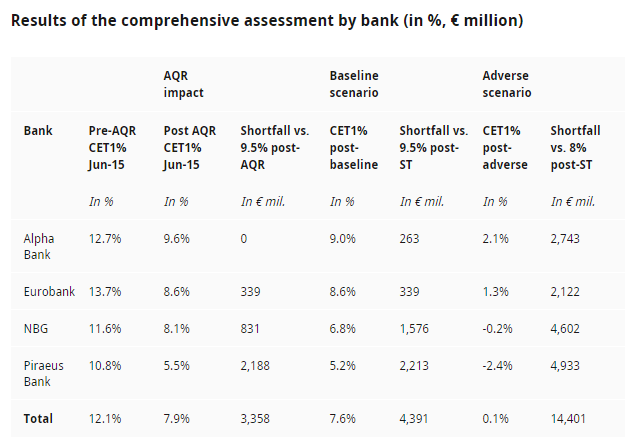 To ensure consistency, the 2015 AQR was in line with the methodology of the 2014 comprehensive assessment; thorough quality assurance of the AQR results was performed by ECB Banking Supervision on the local and central levels.

Significant AQR adjustments have been identified in this exercise; despite the effort made by banks to record in their accounts an important part of the AQR findings from 2014. These were primarily driven by the deterioration in the macroeconomic environment in Greece, which led to higher NPE volumes as well as lower collateral values and cash flow valuations. Moreover, the standardisation of the definition of key metrics across the EU resulted in further NPE and impairment recognition in the AQR.

For example, the full implementation of the European Banking Authority’s implementing technical standards on NPE meant that forborne exposures could be better identified and tested for impairment. Finally, the disallowance of tax offsets within the AQR has amplified the adjustments of the AQR 2015 vis-à-vis 2014.

The stress test was led centrally by the ECB and was based on data provided by the participating banks, which was quality assured by a central team. The methodology applied was largely based on the 2014 stress test performed by the European Banking Authority and the ECB.

It consisted of both a baseline and an adverse scenario, applied for the period from 30 June 2015 to 31 December 2017. Greek banks were required to maintain a minimum Common Equity Tier 1 (CET1) ratio of 9.5% and 8% under the baseline scenario and adverse scenario, respectively.

Where a bank has a capital shortfall in more than one part of the exercise, the maximum amount determines the final capital shortfall that needs to be covered. The baseline scenario was defined as part of the third economic adjustment programme for Greece and the adverse scenario was developed by the ECB in consultation with the EU Commission and the International Monetary Fund.

The assumptions of GDP growth for both scenarios are outlined in the table below:

Detailed results and information on the outcome of the exercise can be found in the disclosure templates and the aggregate report at the ECB Banking Supervision website.