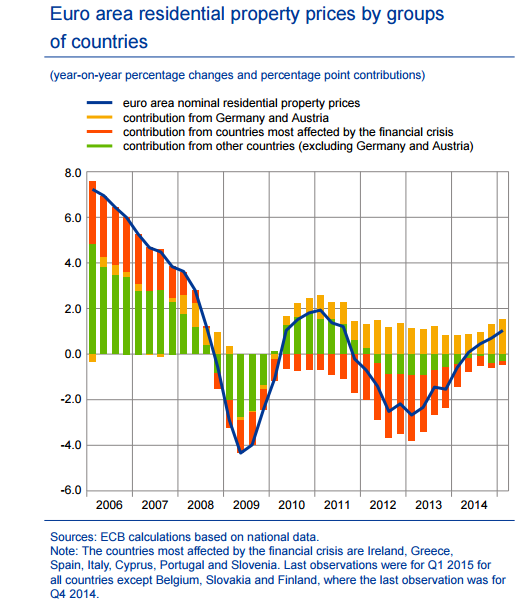 House prices have been a key indicator in assessing the state of the euro area economy since the financial crisis.

This reflects the general importance that the housing sector tends to have for the timing and amplitude of the business cycle and, in particular, its specific importance in the aftermath of a boom-bust episode.

In a number of euro area countries, house prices had increased at unsustainable rates and to unsustainable levels prior to the crisis, and the inevitable adjustments had subsequently led to declines in house prices or muted developments at best.

After some ups and downs during a protracted period of adjustment, there are now increasing signs that house prices in the euro area are finally on the rise again.

Measured in terms of the annual rate of change in residential property prices, the cycle reached a low point in early 2013 before the rates of change became successively less negative and moved into positive territory in the second half of 2014.

This recovery does not appear to have been very strong thus far, but the upward path of the growth rate is relatively broad-based across euro area countries.

Against this background, it is instructive to analyse the various factors underlying the nascent recovery in house prices, as well as its strength and sustainability going forward.

Understanding the state and nature of the house price cycle is important from both a macroeconomic and financial stability point of view. This is because it is linked to the business and financial cycles, with house prices affecting credit markets, as they determine the value of collateral that households can borrow and banks can lend against.

Tellingly, the collateral channel had shown its importance in the context of the financial crisis and the banking sector problems that emerged in its aftermath in some euro area countries.

It then compares the ongoing house price and credit cycles with previous ones (Section 3), before elaborating on the interaction between house price developments, the real economy and the banking sector (Section 4).

Recent developments in euro area residential property prices suggest that the corner has been turned and a recovery is underway. The annual rate of change in house prices started to increase in mid-2013, turning mildly positive in the second half of 2014.

There were similar signs in 2009-10, relatively soon after the financial crisis, but the recovery could not be sustained, given the unfolding of the euro area sovereign debt crisis.

In this context, it is instructive to assess the sustainability of the nascent, but still subdued, recovery for the euro area as a whole by looking at the different factors underpinning it.

First, the recovery in euro area house prices appears to be relatively broad-based across groups of countries. With contributions to euro area house price growth from Germany and Austria remaining solidly positive, the upturn in the annual growth rate since early 2013 essentially reflects a gradual easing of the negative contributions from the countries most affected by the financial crisis (Ireland, Greece, Spain, Italy, Cyprus, Portugal and Slovenia).

To a somewhat lesser extent, this also holds for the group of other euro area countries (excluding Germany and Austria) (see Chart 1). These broad-based contributions towards positive euro area house price growth differ from those in the upturn of 2009-10, when the countries most affected by the financial crisis continued to contribute negatively and the upturn mainly reflected a strong rebound in house price growth in the other countries.

Source: ECB Articles - The state of the house price cycle in the euro area