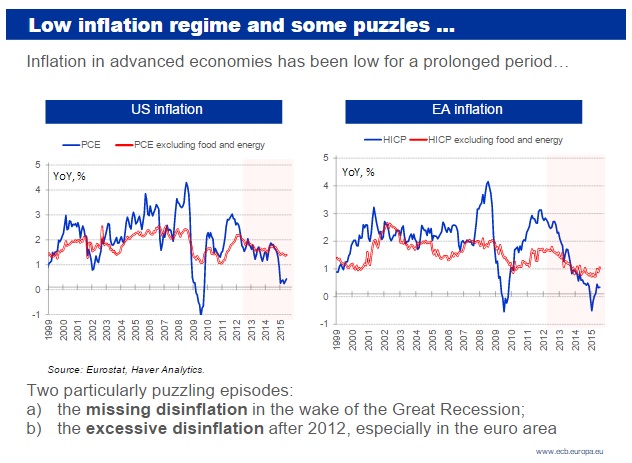 Understanding inflation dynamics has become particularly important in present times, in view of the prolonged low inflation phase. The traditional relationship between slack in the economy and inflation seems to have weakened significantly in some countries.

This requires a careful examination since that relationship – the Phillips curve – is the traditional cornerstone of the transmission mechanism giving central banks control of inflation. Inflation dynamics since the Great Recession have shown signs of instability that have led to a sequence of systematic forecast errors. The two puzzles of “missing disinflation” in 2009-11 followed by “excessive disinflation” after 2012 triggered a surge of new research around the Phillips curve and its possible demise.

After reviewing a number of unsettled issues pertaining to the Phillips curve in the economic literature, such as those related to the measurement of economic slack and inflation expectations, the discussion note argues that the two puzzles can be explained, and that the Philips curve for the euro area is alive and well. This is comforting since the opposite result would raise serious questions about the central bank’s capacity to control inflation.

The current phase of low inflation is significantly driven by negative demand shocks at the global and domestic level, besides commodity price developments. This is certainly the case for the euro area where the low inflation can largely be explained by domestic demand weakness, possibly leading to a larger degree of economic slack than indicated by the usual methods. The link between inflation and real economic activity appears however to have strengthened in the euro area as of late (steepening of the Phillips curve). We should thus be able to bring the inflation rate closer to target in the medium term, provided that our policies are successful in significantly reducing the economic slack.