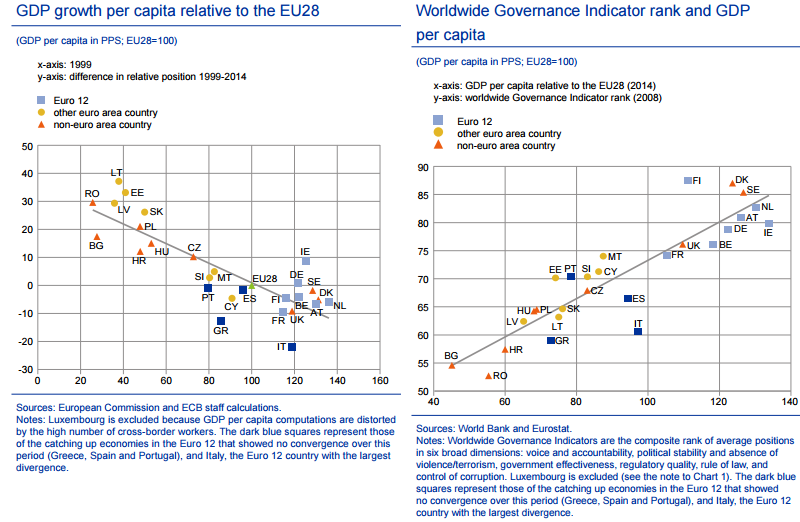 An important lesson from the euro area sovereign debt crisis is that the need for sound economic policies does not end once a country has adopted the euro.

There are no automatic mechanisms to ensure that the process of nominal convergence which occurs before adoption of the euro produces sustainable real convergence thereafter.

The global financial crisis that started in 2008 has showed that some
countries participating in Economic and Monetary Union (EMU) had severe
weaknesses in their structural and institutional set-up.

This has resulted in a large and protracted fall in real per capita income levels in these countries since 2008.

This lack of convergence is related to several factors, notably weak institutions, structural rigidities, weak productivity growth and insufficient policies to address asset price booms. Against this background, several
factors appear crucial for ensuring real convergence in EMU: macroeconomic stability, and sound fiscal policy in particular; a high degree of flexibility in product and labour markets; favourable conditions for an efficient use of capital and labour in the economy, supporting total factor productivity (TFP) growth; economic integration within the euro area; and a more active use of national policy tools to prevent asset
price and credit boom-bust cycles.

The Big Idea
euro MAGAZINE
HOW ... TO misUSE:) theory ... has to be true while it would not be wrong at all to assume ultimately is A POLITIC decision that still needs gov endorsment - missing consistently on that may cost US :(