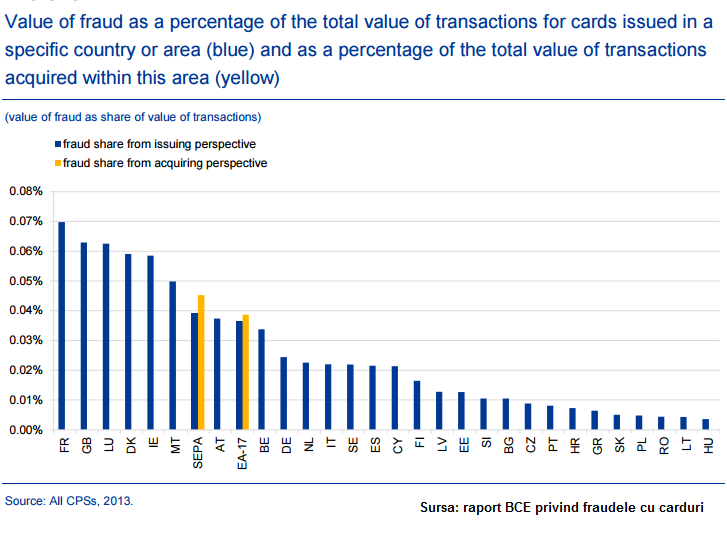 Fraudulent transactions conducted with cards issued within the Single Euro Payments Area rose to €1.44 billion in 2013, up 8% on 2012 from a low base, according to an ECB study of card fraud. The report calls for more security for online payments, which are most prone to fraud.

This fourth oversight report on card fraud analyses developments in fraud related to card payment schemes (CPSs) in the Single Euro Payments Area (SEPA) and covers almost the entire card market, according to the ECB report.

The total value of fraudulent transactions conducted using cards issued within SEPA and acquired worldwide amounted to €1.44 billion in 2013, which represented an increase of 8% from 2012.

However, in relative terms, i.e. as a share of total transactions,
fraud is still below the level observed in 2009. In 2013, 66% of the value of fraud resulted from card-not-present (CNP) payments, i.e. payments via the internet, post or telephone, 20% from transactions at point-of-sale (POS) terminals and 14% from transactions at automated teller machines (ATMs).

With €958 million in fraud losses in 2013, CNP fraud was not only the largest category of fraud in absolute value but, unlike ATM and POS fraud, also the only one recording an increase compared with the previous year, with growth of 20.6% from 2012.

However, based on this partial information, CNP fraud grew faster than CNP transactions. The largest drop in the level of fraud was experienced by card fraud committed at ATMs, with 13.7% less fraud in 2013 than in 2012, the first time in four years that ATM fraud fell, while fraud committed at POS terminals went down by 7.9%.

The lower level of ATM fraud was due mainly to a substantial decrease in
card-not-received and counterfeit fraud for this category. Counterfeit fraud accounted for 45% of the value of fraud at ATMs and POS terminals, while fraud using lost or stolen cards made up 43%.

As observed in previous years, counterfeit fraud was predominant for transactions acquired in countries outside SEPA (see below). This
trend continued in 2013, although the category has seen a decrease in counterfeit fraud compared with 2012.